Q: Why is Debora Allen running for supervisor?

Good governance is the duty of governing bodies to deliver promised services efficiently and in an impartial way, without conflicts, favoritism, or questionable deal making. Good governance is transparent and accountable and puts the public first.  Good governance is independent, and not beholden to the political special interests that have dominated our local politics through targeted campaign donations and negative misinformation campaigns for decades.

Good governance is a puppet to no one and neither is Debora.

Q: Why are labor unions and other special interests spending hundreds of thousands of dollars supporting Debora's opponent, and opposing Debora Allen with misinformation and lies in the race for Supervisor?

A: Because Debora has a track record of bringing common sense to the public discussion when it comes to how government functions (or doesn't).  Her work for transparency and accountability of how money is spent in local government sometimes runs contrary to what special interests want.

Q: Why should I care if a county supervisor candidate is inordinately funded by labor unions and other special interests?

A: Heavy funding from labor and other large special interests creates the opportunity for conflicts of interest, favoritism and questionable deal-making behind closed doors.

County supervisors are directly involved with negotiating labor contracts for county workers. They also have jurisdiction over the current county policy that mandates a union-only environment for construction industry labor on county projects.  See the funding chart below outlining the major donors supporting Debora's opponent and opposing her.

Q: Who exactly would a labor-funded Supervisor be representing at the bargaining table, Big Labor or county taxpayers?

A: Taxpayers need to be able to trust their elected leaders to do the right thing, even behind closed doors. But can a supervisor who owes their very job to the unions they are bargaining with really be trusted to look out for the public’s interest? The answer is clearly no.

She’s no puppet. And they know it.

Q: Who is funding the misinformation attacks on Debora Allen?

A:  According to publicly filed FPPC reports, county employee and construction industry unions have been the primary funding source of the attacks against Debora so far. These are some of the same special interests supporting her opponent. They are funneling money through a political action committee (PAC) called Contra Costa Works to pay for digital ads, phone banking, canvassers, and mailers attacking Debora with disinformation and supporting her opponent. They even have a website documenting their lies here: www.contracostaworks.com

Here's a list of the funding sources to date for both the PAC opposing Debora, and the Campaign of her opponent (click on chart to enlarge): 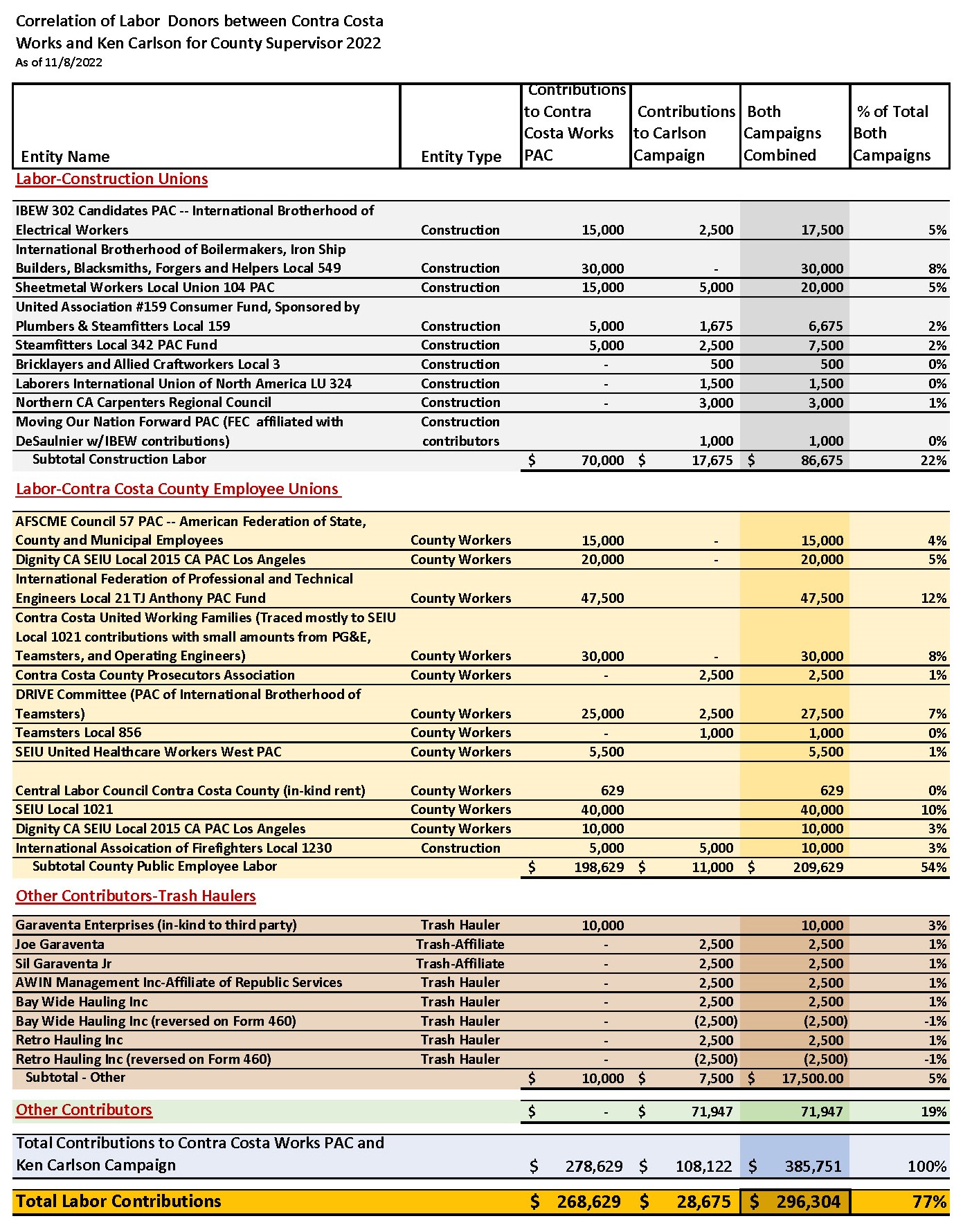 A total $386K combined has been contributed to the Contra Costa Works PAC and Ken Carlson's campaign for the general election. About $300K, 77% of total funding, came from construction and public employee unions. Add to this, another $80K spent on another PAC and candidate in the June primary, along with union member communications expenditures that fall outside of this reporting, and the total is heading for  $500K from labor interests to defeat Debora Allen.

Q: Is the Contra Costa Works PAC connected to the campaign of Debora's opponent?

A: It sure looks that way. Here's why:

When you follow the money trail above, it becomes clear who is behind the campaign of Debora's opponent, and why. It's construction unions and county worker unions that are funding over 70% of his campaign, including the attack ads on Debora.

This all gives new meaning to "we're all in this together".